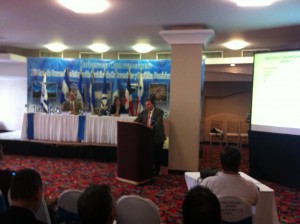 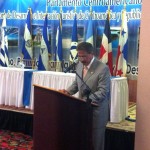 Epaminondas Marinakys, President of the National Chamber of Tourism in Honduras delivering a speech.

Presided by the Honourable Congressman Angel Andres Matuti, president of the Tourism Commission at the Central American Parliament and one of the representatives from Honduras in this regional institution discussed different aspects concerning the facilities of travel between the Central American Countries. The event had representatives of Guatemala, El Salvador, Honduras, Nicaragua, Panama, Belice and the Dominican Republic, Costa Rica is not a member of the Parliament and therefore was not represented in the event. Amongst the most important topics were the issues with security throughout the region, which has become a big deterrent to visitors, especially in the Northern Half of the region. Coralia Rivera, the vice minister of Security, took advantage of the Forum to inform of the progress in improving security in Honduras, and it was agreed that the situation is not a threat to tourists and needs to be addressed with a strategic, well thought of public relations policy to inform tourists and foreign governments about the reality. The CA4 treaty, that provides a fast lane border crossing between residents of Guatemala, El Salvador, Honduras and Nicaragua is not working adequately, according to the report that various tour operators presented, and this must be addressed immediately to facilitate tourism in the region. Another interest aspect that was reviewed is the difficulty in obtaining credit for tourism related businesses. Traditionally, local banks shy away from loans to enterprises that have to do with tourism, so it was interesting to listen to representatives from the Banco Centro Americano de Integracion Economica (BCIE) or Central American Bank for Economic Integration, inform about the credit lines they have with the local banks to promote tourism. As it turns out, they have an ambitious product to promote sustainable tourism for small and medium sized businesses, but the products have not been promoted by the local banks. Learning about these products will surely make it easier for business owners to access credit with their banks.
Posted in Uncategorized