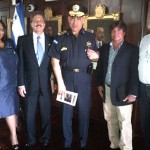 General Bonilla, Chief of Honduran National Police with members of the National Chamber of Tourism of Honduras

On Wednesday, June 27, a group of tourism entrepreneurs met with vice president Maria Antonieta Guillen de Bogran at the presidential palace to discuss how the perception of insecurity is affecting the travel industry in the country. The meeting included a group of high level Colombian National Police officers, who are currently advising the Honduran Police on how to deal with violence and its effect on tourism. The vice president was accompanied by Retired Army Major Pompeyo Bonilla, Honduran Minister of Security, Synthia Solomon, Undersecretary of Tourism, and the chief of Honduras National Police, General Bonilla.   It was agreed that Police would increase the force of the Tourist Police officers in the areas most visited by tourist, these being Copan Ruinas, San Pedro Sula, Tela, La Ceiba, Utila, Roatan and Tegucigalpa.   The private sector, represented by Canaturh (National Chamber of Tourism of Honduras) president, Pamy Marinakys, who was accompanied by Troy Bodden, president of the Utila, Bay Islands Canaturh Chapter, and John Dupuis, president of the La Ceiba Canaturh Chapter, requested immediate attention to the issue and suggested a “safe corridor” for travellers along the main tourist routes, mainly Copan Ruinas to San Pedro Sula, San Pedro Sula to Tela and La Ceiba and San Pedro Sula to Tegucigalpa, with the understanding that the vast majority of tourists that travel in the Honduras mainland do so on these routes.   The Minister of Security, Pompeyo Bonilla committed himself to take full advantage of the 18 months that the current government has before elections to increase the tourist police force and work towards reducing crime in the country.   The chief of the National Police, General Bonilla, who was a well earned reputation as a zero tolerance for crime policeman, stated that he is currently working hard and taking full advantage of the Colombian advising police team in the country.   The top Colombian advisor stated that his mission was here under direct instructions of President Santos of Colombia, who has set his mind on helping Honduras solve its issues, because he does not want Hondurans to suffer as Columbians did in the past.   Vice president Guillen stated that tourism is one of the pillars of the Honduran economy and that the government wants to make sure that it protects it and helps it grow. She was the executive president of the Honduran Institute of Tourism during the Callejas regime and has always been close to the Honduras travel industry. She expressed concern regarding the lack of growth in visitors to Honduras in the current year and vowed to help the industry recover.
Posted in Uncategorized Tagged with: Canaturh, General Bonilla, Honduras National Police, Maria Antonieta Guillen de Bogran, Pamy Marinakys