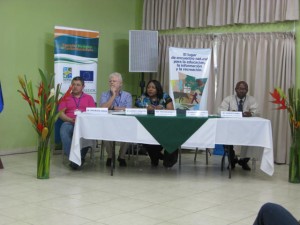 The first Workshop for scientific tourism was formally inaugurated today be Mr. Venancio Sabio, Governor to the Department of Atlantida. The event, hosted at the CREDIA installations in the City of La Ceiba, looks at the options of developing Scientific and Academic tourism to the area. With the region around La Ceiba encompassing over 8 different protected areas with different statuses, the potential for academic and scientific investigations is outstanding. Sponsored with funds from the European Economic Community, through the ProCorredor project, the event looks to create synergy between NGO’s, local governments, the central government as well as organizations of local society to attract academics from renown universities around the world to conduct serious scientific research in one of the most bio diverse regions of the world. Representing the central government was Mrs. Synthia Solomon, undersecretary of tourism. The workshop was attended by academics of the different universities that campuses in the City of La Ceiba, as well as by local authorities of the ministry of environment and the department of forestry. Guest speakers included Dr. Mauricio Osorio, whose theme was Scientific Tourism in Aysen, in the Chilean Patagonia; Dr. Celia Selem, from the University of Yucatan in Merida, Mexico and Natalia Ureña, from Costa Rica. The local Chamber of Tourism in La Ceiba cooperated actively in suggesting speakers and themes for the event as well as promoting the event.
Posted in Uncategorized